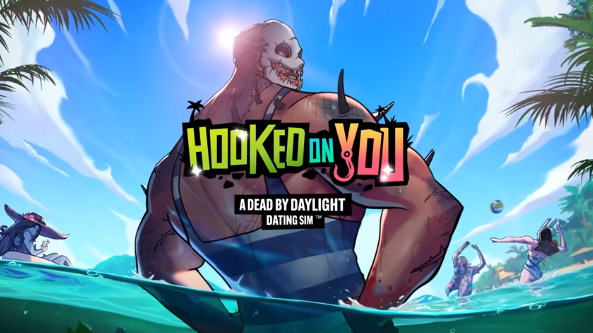 Behaviour Interactive has gone above and beyond for Dead By Daylight’s sixth year anniversary. They have made sure that fans will have plenty of entertainment over the next few months. The most interesting announcement on their anniversary broadcast was Hooked On You. This Dead By Daylight dating sim will be available to Steam this summer. The debut trailer is at the top.

Behavior teamed up with Psyop (creators of I Love You, Colonel Sanders!) Hooked On You was created by A Finger-Lickin’ Good Dating Simulator. The visual novel takes players to Murderer’s Island to find romance with either The Huntress or The Spirit. You will have the option to choose which characters you wish to romance, and how to do it. You might be lucky enough to meet one of the Killers or you could end up on the cutting block. It’s not easy to love.

Mathieu Côte, Head of Partnerships For Dead by Daylight, stated the following in a press release about Hooked On You: “You wanted it?” You got it! Hooked on you: A Dead by Daylight dating sim combines horror, humor, and romance to provide a new way for fans of the Killers to interact with one another and form an emotional bond. We want to offer fans a new and unexpected way to explore the world of the Dead by Daylight with our first visual novel.

Hooked on You will launch this summer via Steam, but it’s not clear if the visual novel will also be available for consoles. Hooked On You is sure to be a wonderful love letter for Dead By Daylight fans.