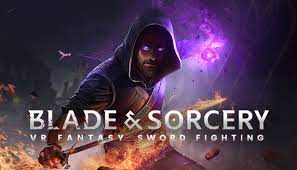 The VR weightless, wiggle sword combat era is gone. Blade & Sorcery is a medieval fantasy sandbox that focuses on melee, ranged, and magic combat. It fully utilizes a realistic physics-driven interaction and combat system. Created exclusively for VR, collisions follow the laws and weight of objects, creatures have full body and physical physics, and blades can penetrate soft materials and deflect magic. Foxhole

Blade & Sorcery is a combat game where your creativity is the only limit. You can choose your weapon, stance, and fighting style to become the warrior, ranger, or sorcerer that you have always hoped to be. Fast-paced, satisfying combat. You can use a variety of skills to dodge enemy attacks, launch projectiles and slash away mobs. Your attacks will change depending on the “Cores” that you choose and the upgrades you choose to add to your runs.

Blade & Sorcery allows you to become the hero warrior, ranger, or sorcerer that you have always envisioned. Your imagination only limits combat.

Blade and Sorcery is my favorite VR game. Fighting feels real, controls are intuitive, and there is nothing more satisfying than launching a knife directly into the face of an archer. The game’s modding community is massive, with new maps and weapons being added to Nexus Mods almost every day. Be aware that every title update almost guarantees that every mod available will become incompatible. It may take a while for mod creators to get around to updating their mods with the latest game version.