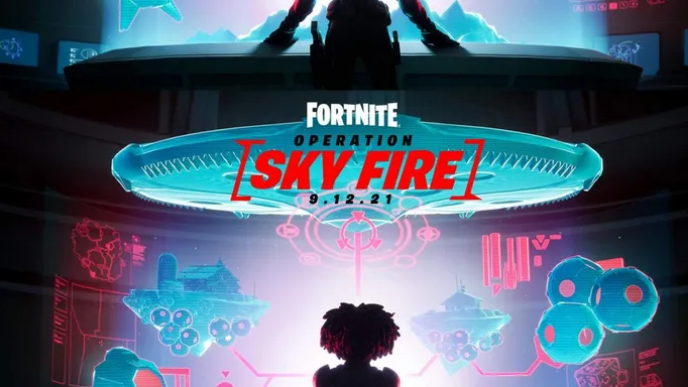 Fortnite Chapter 2, Season 7 is coming to an end, and it is time for a Live Event to kick off the final battle.

For a long time, loopers have dealt with the alien invasion.

The I.O. The I.O. has been working tirelessly to eliminate the aliens. However, they have not been able to make much progress.

Slone is now ready to execute her master plan.

For weeks, players have been completing quests to aid Doctor Slone in her final push against Aliens.

Operation: Sky Fire is now possible. It will stop The Last Reality’s occupation and put an end to the Alien occupation.

Players should lobby at the venue no later than 30 minutes before the event to ensure their participation.

To show they will be attending the Chapter 2 Live Event, Season 7, players can update their status in-game to “Save The Date.”

Operation: Sky Fire will involve 16 players joining a strike group to sneak aboard the Mothership to complete the mission given by Doctor Slone.

In-game, Corny Complex was abducted. Players can see bombs attached to floating landmasses as they make their way to the mothership.

This is Slone’s final plan. The Fortnite Lobby has been updated.

Fortnite Chapter 2, Season 7, will conclude on September 9, 2021, with the Bargain Bin Wild Week. This week features discounted items from NPCs as well as Vending Machines.

Legendary Quests will be available to spend Gold Bars.

An important note for players is that all Battle Stars, Gold Bars, and Alien Artifacts must be spent before Operation: Sky Fire or they will be lost when the Fortnite Chapter 2, Season 8, starts.

Superman Quests must also be finished by that time.

Is The Mothership Going to Crash?

Leaks suggest that the Mothership will be crashing at Misty Meadows.

Misty Meadows won’t likely survive the aftermath due to the size of her ship.

It is possible that the Mothership could split into multiple pieces with multiple POIs that are affected by its fall.

As per the Fortnite weekly challenges, we’ve been placing warning signs at almost every major POI in Fortnite. There is a possibility that multiple POIs could be affected by falling debris.