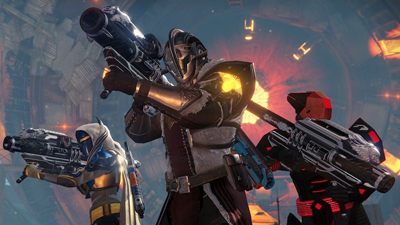 Do you know anyone who has ever been shot in their nards by a sibling, friend, or relative using a nerf gun? Are most of us? Yeah. Those little orange and blue buggers are very painful. Imagine being destroyed by the three most giant darts Nerf makes at you at mach speeds. Yeah.

The Bungie madlads and Nerf will release a $185 Gjallarhorn Launcher (from Destiny games). It comes in a 40-inch case and can be reloaded like a weapon. If you are looking for sibling warfare in full-scale, pre-orders will go live next week.

Gjallarhorn’s launcher is synonymous with Destiny. Fans love the legendary gun for its unique and stunning design and incredible firepower.

Bungie has written a blog post about the design process of the collaboration. You can find it. Gjallarhorn will fire three MEGA darts simultaneously to vaporize all your foes. Justin Saccone, Nerf’s product engineer (jeez, what an excellent job!), says that “with that shell, we’re shooting three MEGA darts simultaneously, which gives the visual sense that the Wolfpack Rounds swirling through the air towards our target.”

Let’s talk about the reload. As PC Gamer noted, Saccone describes how they tried to recreate the experience of reloading your launcher like you would in-game. He explained that they looked at the various reloading animations and their function in the game. We wanted to incorporate how the Blaster reloads in the game. The Blaster’s top housing shifts foin-game and opens the loading bay like in the animation. You then pull the shell back and can blast off three mega darts.

Pre-orders will go live next week. However, you’ll need to complete a few tasks to be eligible for an order. This includes completing a quest in Destiny2. The Bungie blog post outlines the hurdles you will need to clear.