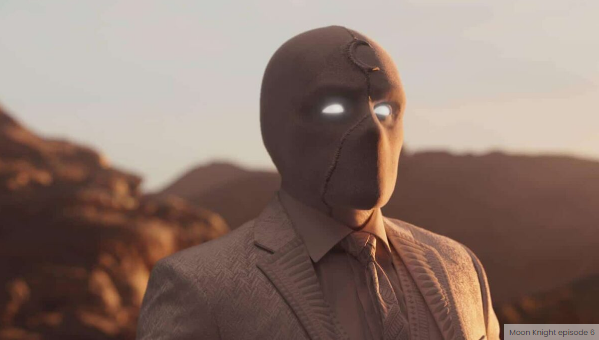 Moon Knight is a great series. It’s refreshing to find a story that is so well-written and easy to follow, given the MCU’s obsession with connecting everything. Six episodes are not enough. The 4 first episodes were a solid foundation for the character’s relationships and major internal and external conflicts.

Then episode5 aired. Despite the darker themes, the show was more determined to rush Marc and Steven along for catharsis so we could have the finale showdown for episode 6. They need to wrap up things, so they are moving quickly. Because of this, emotions don’t get the chance to stick.

We are with Marc in Episode 6. We know that Marc will not accept this peaceful fate before opening his mouth. Steven is now lost in the Duat sand, and Layla is trying to handle Harrow herself in the real world. Marc loves these people too much to let them go and enjoy the peace and tranquility of the afterlife. To Taweret’s dismay, he sets out to find Steven. Although the pair’s reunion is an emotional moment, we don’t get to experience anything because they are running back to the real world, continuing what they started.

Despite the odds being against them, Ammit was freed by Harrow. Despite Harrow’s inequalities, Ammit chose him to be her avatar due to his loyalty and because he had freed Ammit. Harrow is open to receiving her judgment and offers to let any of his followers serve as her avatar. It’s an interesting moment. Harrow is not hypocritical and does not believe he is above all rules. He had one mission: to free Ammit. Now that he has done so, he seems happy to accept her verdict even though it will not be a good ending for him. It would have been better if they extended this moment to flesh out his villainy and not Ammit simply ignoring his concerns because of his previous avatar.

Layla freed Khonsu and offered her the chance to become his avatar. Khonsu then heads off to talk to Steven and Marc, coinciding with Steven and Marc’s return. Layla realizes that they will need more avatars to stop Ammit after speaking with one of the avatars. Despite rejecting Taweret’s offer earlier, Layla calls upon the Goddess to accept her role as her avatar, even if it is temporary. While Taweret is charming and hilarious, this scene is completely out of place. Layla communicates with the Goddess through the possession of her own body. May Calamawy switches between two personas during this scene. Next, Taweret mentions Layla’s father. This is an emotional moment, but we are unable to feel anything due to the absurdity of the scene.

Layla’s transformation into Taweret’s avatar looks amazing. Layla’s costuming is amazing, the outfit is battle-friendly, and Layla looks stunning. Layla’s gorgeous curly hair is a great feature. Producer Sara Goher talked about Layla’s look and the intention behind it.

She stated that she was an Egyptian girl with curly hair. It’s not uncommon for girls to spend years straightening their hair with irons or using chemical processes. This is because they don’t get enough representation of curly hair. It all comes down to the curl, her story, her strength, and these were all very important aspects that we wanted instate in her characters.” Layla’s rescuers ask Layla if she is an Egyptian superhero. This is a moment that helps us to understand why representation is so important.

This finale finally features more action as Layla and Marc/Steven battle Harrow. Oscar Isaac is quick to change between Steven and Marc’s costumes, which is well handled. Khonsu & Ammit fight in the background, almost like Godzilla vs. Kong but without the stakes.

Marc/Steven, and Layla successfully cast the spell to bound Ammit from Harrow. Marc/Steven is now free of Khonsu, and their lives continue as normal. Or does it? The end credits scene, I believe, is well done. It doesn’t allow for things to close very neatly, which is essential to good storytelling. It’s impossible to keep things tidy. The end credits suggest the possibility of another season. It makes sense to continue the series and keep the world within its narrative. Although nothing has been confirmed, I believe there is enough potential for another season. We’re going to need more episodes if they greenlight another season. 6 is not enough.