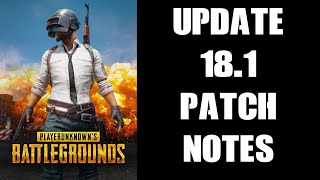 PUBG Season 17 is over on PCs and consoles. A new update has just been released that prepares players for Season 18. Krafton has released patch notes and a preview for the new season. The update will be available on June 15th. This is a summary of what you can expect from PUBG Season 18.

The Item Spawn balance is being reworked.

Since Update 16.2, it wasn’t easy to find healing items in Erangel or Miramar Normal Matches. Krafton reviewed internal data and found that the spawn rate for heal items dropped slightly in Erangel’s Normal Matches. This was due to an increase in attachment and weapon spawn rates. The item spawn rate is being adjusted to ensure that players receive enough healing during matches. Many items have their spawn rates being changed. It will help if you read the patch notes for more information.

To prevent players from scaling Paramo’s top, cliffs have been built and landscapes added to some mountains close to Capasso. Specific areas, such as Lab and Atahul, have received additional rocks and cover. This can provide cover for gunfights. The new update includes more map modifications that aim to change the balance of older maps.

Our system will recognize your items and grey them out to don’t purchase the same items when you buy a Set item. The Set will only be available to you to receive the bonus items if you have all of the individual Set items. This new system applies to all items in our shop.

Also, the problem of the neck becoming transparent when a character is wearing a Bad to the Bone top or Floptop Hoodie was fixed in the new update. To view the official patch notes, click. To learn more about why Callisto Protocol has been removed from PUBG World, click.