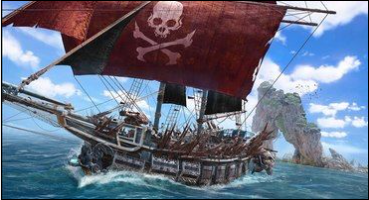 Skull and Bones create its pirate fantasy by focusing primarily on its different ships. This means that we will spend less time on foot, but it allows us to get a better understanding of the systems that power its powerful, elegant vessels, and the explosive combat encounters they face.

You begin your pirate career by controlling a Dhow, a small, simple ship designed to allow you to navigate the oceans and fight off wildlife.

You will gain infamy and be known throughout the Indian Ocean. As you become more famous, blueprints and designs are available that allow you to build more giant Skull and Bones ships and other types of vessels.

Skull and Bones’ launch will include 12 ships of three types. Cargo ships are more durable but less manoeuvrable. These ships are best for transporting large amounts of loot. They are easily identifiable by their round hulls, smaller sails and bulky appearance.

Navigation-type Ships are the fastest but have smaller cargo spaces and lower hull hit points. These ships have streamlined hulls and the most sails. They also have a pointed appearance.

Firepower-type vessels are equipped with the most gun ports, but they can be more challenging to manoeuvre. The flurry of explosives heading your way might not be enough to identify them, but their blocky hulls and an average number of sails could.

These ship types give a good idea of the strengths and weaknesses of each ship. But how they play is just one aspect. The developers claim that all 12 ships have their own gameplay styles.

Another important factor is the size, which goes well beyond visuals. The ship’s draught profile is what determines its ability to navigate rivers going inland, reach the coast, and then head towards the ocean.

You might expect that larger ships are not the best choice to gather resources from small rivers and lakes.

Another important aspect is weapon availability since different ship types can have different weapons. The general rule is that larger vessels can equip more weapons and/or larger weapons, such as the Giant Ballista or Greek Fire.

You can also customize your ship with cosmetic skins and accessories such as cargo bags. These will increase your carrying capacity as well as different types armour that protects against certain types of damage but are susceptible to other types.

These are the 12 Skull and Bones vessels available at launch. They were spotted on the linked dev blog. Keep in mind, however, that launch might have different perks and other specialities.

Each ship has its own perks, which further define its playstyle. Ryan Barnard, Game Director, noted that Skull and Bones ship types are more of a tool than a direct upgrade during the game’s July 2022 re-reveal.

It is possible to have a fleet of boats that you choose from, provided you have enough resources.

Finally, each Skull and Bones ship has furniture slots that allow you equip items that you can customize.

You can get increased damage from a particular quadrant, brace efficiency or ship hitpoints. They can automate processes such as refining, cooking, fishing, and ammo if combat is not your goal.