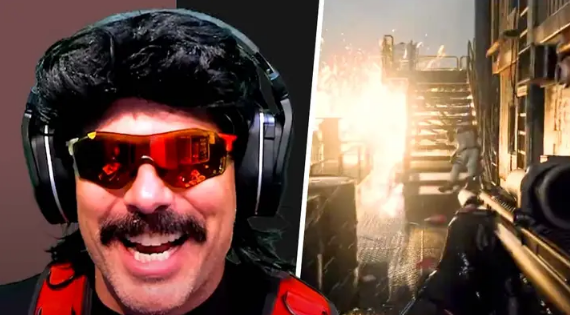 Herschel “Dr Disrespect” Beahm is most well-known as a streamer. The most controversial was the one banned permanently from Twitch in 2020. He announced in August that he would sue the platform for a reason for his ban. However, the dispute was resolved earlier in the year.

In case you didn’t know, Beahm is also co-founder of a new gaming studio called Midnight Society. According to Kotaku, the team has been working on a shooter that will rival Call of Duty. The game was previously codenamed, Project Moon. Now, the official title is Deadrop. It is missing the second “D.”

Midnight Society has described Deadrop as a “vertical extract shooter (VES for a new age in competitive multiplayer)” and claims to be “building the most competitive PVP experience.”

“40 years after the Climate Wars, pollution and population levels have risen dramatically.” The synopsis of the studio’s website states that cities build massive REFINER STATES, mega structures designed to remove toxins from the stratosphere. These towers can be self-governed as ‘city-states’ and have one export: SPACE DUST. The concentrated pollutants are then bricked and cut into pieces, then sold to the addicted population of the surrounding urban sprawl.

It continues, “Once Government-owned facilities. The lucrative ‘DUST trade has now led the forced occupation of REFINER STATES [by competing factions fighting to control the towers and the resources within].” These factions are made up of Skins or Syns who compete with the Cleaners, the Refiner State’s occupying force, in an endless struggle for resources and equipment.

Some early game fans were given access to a demo version of the game, and online videos began to appear. It’s still a shooter game, but the gameplay is not groundbreaking. Have a look at the video below.

The game is still in development, so it is not surprising that the depth of the game is not yet there. However, Beahm stated that even if you took a screenshot from his game, nothing in the COD: Modern Warfare II trailer could match it. It’s a lot of words, and I don’t know how many people would agree with him after seeing what he was talking about.

Dr. Disrespect is no stranger to game development. He was previously a Call of Duty level designer at Sledgehammer Games. We’ll have to wait and see what the final product looks like. I believe most people will stick to Call of Duty for now.