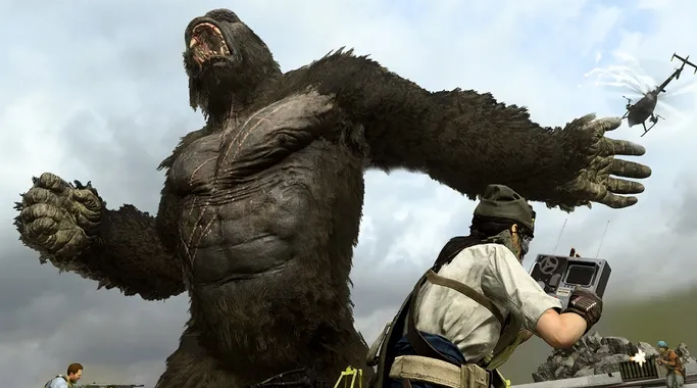 Many bugs and glitches are common in the Pacific era Warzone. These issues can impact players’ time on Caldera or Rebirth Island.

Operation Monarch is in full swing and many are dropping into the limited-time event LTE to face off with Godzilla or King Kong in an underwhelming spectacle.

Players will be working their way through the challenges and one secret objective is to cause some players to attempt a daring landing on King Kong’s shoulders. One Warzone player fell prey to the giant thanks to a strange visual glitch.

Players can do damage to Godzilla and Kong during an Operation Monarch match by using the Titan Frenzy event. The gorilla leaps over Caldera when an event is not taking place.

Reddit user ThiccSkips decides to go one step further and fly on top of the giant. Instead of sitting on Kong’s shoulders, the player vanishes into the beast.

Soon after touching Kong, the player appears in the head of the monster, giving the player a unique perspective on Caldera as a giant gorilla.

Many amused players commented on this bizarre situation. One user commented, “No wonder Kong keeps throwing those stones,” “He is hungry inside.” Another source says Kong is “just hungry.”

It is obvious that King Kong is eating players unintentionally. It’s clear that players are unable to return the action and Raven Software may be working to fix it as Operation Monarch nears its end.

It’s best to not try to land on the shoulders of a massive beast that can do huge damage. Check out our page to see the most recent news, leaks and guides for Warzone.