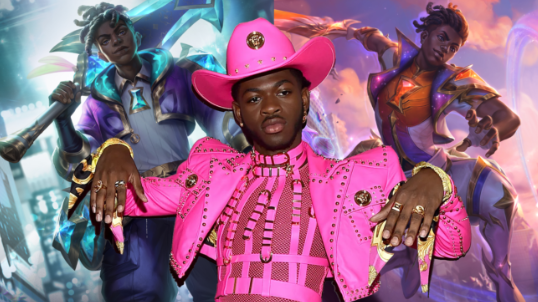 Worlds 2022 is just around the corner, and it looks like Lil Nas X, an American singer/rapper, might lead the next League of Legends musical partnership.

Lil Nas X’s Twitter account first revealed these potential songs. The rapper uploaded a photo last month of himself sitting at a desk identical to those at RiotHQ. The image shows a splash art for Miss Fortune hidden in the taskbar and Riot development icons on his left computer’s desktop. The tweet, unexpectedly sent out, quickly drew many League fans and Lil Nas X followers. YouTube channel Big Bad also uploaded a video that explains all the League meanings.

This evidence is supported by a recent Reddit posting that showcases a League of LegendsWorlds 2022 ad on a Lil Nas X pamphlet. The ad says, “Why to worship legends when there are ways to join them?” – Lil’ Nas X, Worlds 20202.

Every League of Legends World Championship since 2014 has had a theme song that sets the tone for intense League matches.

None of these tracks, from Imagine Dragons’ pop-rock Warriors anthem to Zedd’s Ignite, were created by black artists or featured hip hop or rap. This could be Lil Nas X’s moment to shine on Summoner’s Rift.

Rumours abound that Lil Nas X will be voicing K’Sante, a Shurima-based top laner. This seems to be a far cry from a musical collaboration. This idea is excellent, but the timeline of Lil’ Nas X’s photos and the general production schedule for a champion doesn’t make sense.

Lil Nas X will be the first black person in 2022 to create the League of Legends Worlds 2022 theme. As a black artist, I’m sure he will certainly cut through the electronic/rock haze Riot Music is constantly in. It is easy for the League community to become toxic. This Lil Nas X collaboration will, unfortunately, and inevitably, bring out the racists. They can still be mad.