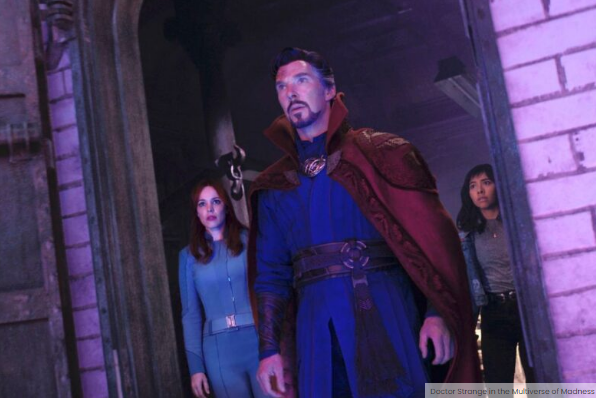 Strange attend Christine’s wedding as Doctor Strange in The Multiverse of Madness. Strange is braver than me, as attending an ex-girlfriend’s wedding is not an easy task, especially because he still loves her. He was busy finding his greater purpose and saving the world, but she continued. She found happiness in someone else. Despite his best efforts to save the world and find his greater purpose, he doesn’t seem happy. Wanda is in the same situation, but her loss is beyond her control.

These superhumans prioritized the greater good, made necessary sacrifices, and people were saved and brought back. However, not everyone sees this with the same gratitude that we might expect. This is what Stephen faces the moment he steps into the church. As we dive into the movie, we see how he confronts this and meets other versions of himself.

Stephen is introduced to the Stephen of a universe that has experienced incursion. Stephen talks about his efforts to find a universe with Christine and a happy Stephen. His search for happiness was futile. These variants made the same choice every where he looked: power and ambition over love, happiness, and both. He became obsessed with what he had lost and sought out the Darkhold to corrupt him. Stephen’s one request for incursion is to get his Christine, even though he speaks of needing to save himself and his universe. Christine is now a prop to his happiness and not an agency partner for him to share the rest of his life with.

Wanda suffers the same fate. She dreams of her children every night as she falls asleep, only to find them absent. She becomes obsessed with her loss and begins to read the Darkhold in search of a solution. However, she is influenced by her entitlement to happiness. After suffering so much loss and living so long in the pit of grief, she longs to find a reality that is free from it. Even if it means killing others, she doesn’t think about what 838’s Wanda would have to do to have her children. Instead, she views them as props that the variants can quickly replace if anything happens to the ones she already has.

It is a path to villainy when we don’t consider others in our decision-making process or use rhetoric for the greater good to justify our actions. This blindness is because it is only our vision that matters. We need to be holding onto the knife and pave a way forward even though it may not be the best. Stephen realizes that he must change his ways and have faith in the ability of those around him to rise to the occasion.

He supports and empowers America because he believes in her despite all the consequences. It is convenient for her to be able to control her powers suddenly. But having Stephen Strange believe in her can motivate her, especially as he is her closest support system. Wanda gets what she wants. Her children’s view of Wanda as a monster is enough to make Wanda see her obsessiveness and make amends.

We begin to see a pattern in all the MCU stories. A fixation on losing becomes so overwhelming that it eats away any sense of objectivity or empathy. After the death of his family, Hawkeye launches a murder spree, Zemo tries to split the Avengers, and Wanda makes an entire community enslaved person to her will because of her grief. Tony and Steve are at odds with what the Winter Soldier did to Tony’s parents. Tony refuses to hold Bucky responsible for the Winter Soldier’s actions.

The same motivation also drove T’Challa. He chased down the Winter Soldier to make his father pay, but in his pursuit, he realizes that his fixation doesn’t make it any easier to feel the emptiness. Like Wanda’s desire to be with her children, killing the Winter Soldier or Zemo wouldn’t bring him peace.

Forgiveness and acceptance are the only ways forward. This will allow you to begin healing and create a new path to happiness. Stephen decides to follow this path in the end. He tells Christine that he loves her in all universes and can’t have her. He can finally let go of his past and embrace the future.