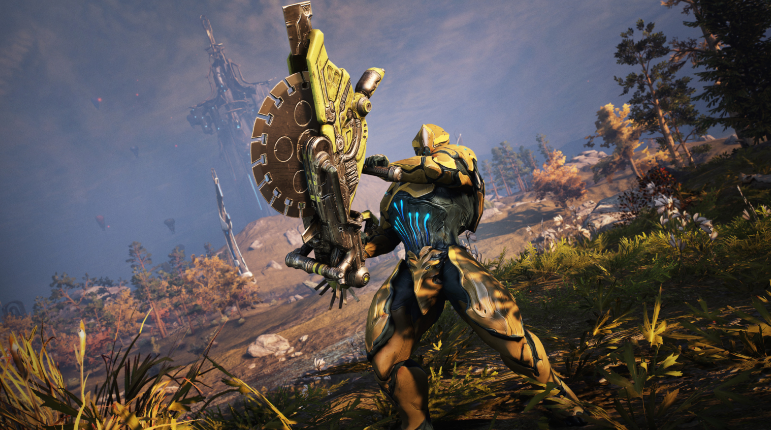 Soon, many players will have a Warframe “Ghoul Saw” in their arsenals. Digital Extremes shared the news that Operation: Plague Star will bring the long-awaited (and somewhat less long-promised) melee weapon. You can also ride it like a unicycle and mulch through enemies.

Technically, the weapon was created as part of an in-game event called “Ghoul Purge,” an enemy weapon that allows zombified enemies to ride. Operation: Plague Star takes place in the same open-world area: the Plains of Eidolon. It’s only semi-annual, however. In January 2020, the last Plague Star was dropped. The Infested faction was defeated by players using special bounties. Grineer Clone Troopers dominate this zone. Operation: Plague Star is a great way to shake up the region. It also offers unique rewards for every reoccurrence. Ghoul Saw is one example of such an item.

Warframe developers first showed a mockup of the weapon during a Devstream early this year. Sheldon Carter and Art & Animation Director Geoff Crookes joked about riding this damn thing. This is what Warframe enemies do already. Ghoul Rictus, who wields this diesel engine item, charges high speed and carries its signature weapon. After firing the massive sawblade like a projectile, players will also be able to do this.

The loot-based shooter is not unfamiliar with bizarre weapons. The most powerful weapons in the wireframe include a bow that shoots snails, a gunblade Energy cannon, and a remote detonated, exploding discus. However, the Ghoul Saw seems to be a new “archetype,” with wild swings as well as the whole clown-cycle thing.

Operation: Plague Star, however, isn’t new. It’s still a fun enough event to keep people busy while they wait for The New War, a major expansion expected to arrive in 2021. The new Plague Star, which literally creates a glowing boil that players can lance, is yet to be revealed. The activity will be covered in more detail today, at 2 p.m. PST on Twitch during Devstream156. The video will also include details about the next souped-up Warframe — Nidus Prime — as well as more details on The New War and a “rerun” of the TennoCon 2021 community event.

This is a lot! This is a good thing, considering this is the first Devstream after this year’s Warframe convention. There are many questions to be answered and many expectations to fulfill. It sounds like players will have something to do afterward. Not to mention that something will take them to the Plains of Eidolon — which don’t appear to be in great shape during The New War gameplay we’ve seen. Operation: Plague Star this year might be the last big celebration for the original open-world area. We know what we know.

It remains to be seen if the Ghoul Saw is worth it (and the grind that goes along with it). It’s a further reminder that Warframe can sometimes be a very, very strange game…

Disclaimer: In late 2020, Tencent bought the Leyou games company. This made it the parent company for Digital Extremes. Tencent also owns Fanbyte Media. They do not influence our editorial coverage. I also run out of jokes to tell at the end, so that I will stop there.